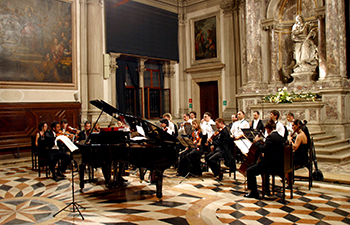 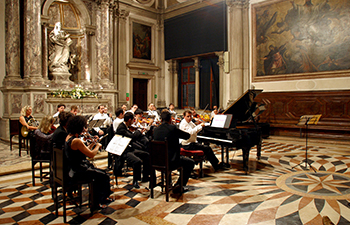 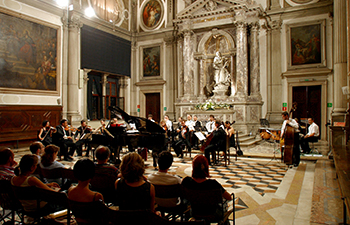 The Orchestra di Venezia maintains and promotes the rich musical heritage of Italy, both at home and abroad. It was created in Venice on Easter in 1996 by Maestro Cuturello. The original concept of the orchestra was to perform baroque music (incl. famous minuets, gavottes and rondos, as well as typical Venetian saltarellos, pavanes and other popular dances) in 18th century costumes along with ballet dancers and interpreters of popular gondola melodies by world-renowned singers. The combination of all of these ideas helps to create a “Venetian Dream” during which audiences are transported back to the fascinating historical times of Casanova and Commedia dell’arte. The orchestra has also performed works by celebrated baroque masters such as Vivaldi, Corelli, Albinoni, and Bocherinni, and a special program of film music by Ennio Morricone, Nino Rota, Nicola Piovani and many others.

The orchestra has regularly performed in the most prestigious music halls in Venice: San Giovanni Evangelista (1996-2002), Palazzo Ducale and in Goldoni’s Theater. Orchestra di Venezia has also taken part in the most important cultural events in the city of Venice (Carnevale, Sensa, Redentore), in various celebrations in other Italian cities and recorded the soundtracks for several films. It has also served as an ambassador of Italian culture abroad during its many tours throughout Japan, South Korea, China, Germany and France as well as to other European countries. Besides the extraordinary number of concerts in Venice (more than 600 in its first seven years!) and the collaboration with well-known music associations (e.g. “Accademia Europea della Musica”), TV Stations (such as RAI and other private Italian and European broadcasters like S.A.A.R and N.B.C) and various music institutions, it is also important to mention the many CDs and DVDs that this orchestra has recorded. Since 2002, Orchestra di Venezia has been managed by Culturell Events, whose main office is located in Vienna, Austria.